The third reunion of the North East Dog Handlers is due to take place on the 10th of October 2009 at 7.30pm at The Ramada Jarvis Hotel, Wetherby. Meals and overnight accomodation can be booked by contacting Maurice Hunt, (ex South Yorkshire) on 01302- 846951. There was an attendance last year of about 30 men from South, West and North Yorks with Humberside, Durham and Northumberland also in attendance.
Posted by Dave B at Monday, August 17, 2009 No comments:

Soon to be published, watch this space.
Another excellent book by Marilyn Walton.
Recognise the Police Dog? 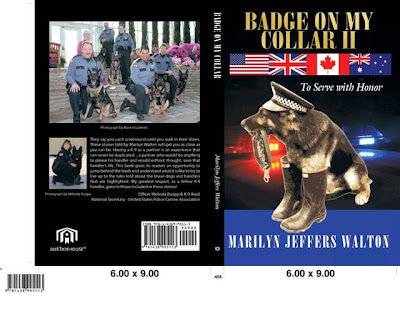 Over to you Nottinghamshire

In the light of the recent incident another Force has taken the initiative to bring about some good news.
Police dogs are being retired on their own "pensions" and "health plans" by the Cambridgeshire force, they are paying for the food, vet bills and kennelling costs during an animal's retirement.

According to figures, Nottinghamshire Police were underspent in the last financial year.
Posted by Dave B at Thursday, August 06, 2009 No comments: