Labels: With Courage and Trust the Book 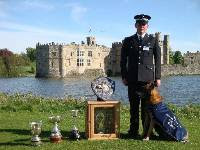 Nottinghamshire Police Dog handler PC Dave Buckley, pictured with his police dog Chas, scored 911 points out of 1,000 to win the competition at Leeds Castle in Kent.
The trials were held between 23 and 26 April 2009 at the prestigious Leeds Castle in Kent, former home of King Henry VIII.

27 dogs and handlers from 23 forces first had to compete at local and regional events to qualify for the right to enter.
Posted by Dave B at Saturday, May 02, 2009 No comments: