Couldn't resist putting this on the blog. Mansfield Police Station yard 1973, my previous posting (Traffic Dept.) before going to the dogs!  Thanks to Tony Parkin for this one.

Just a shame it isn't a photo RNN 626L I couldn't break it. I tried everything so that I could swap it for the new Triumph Dolomite Sprint and didn't succeed! If Ford had known I'm sure they could have used my efforts in their advertising.
In the background is the petrol pump. To issue petrol you had to go into the station, get the key for the pump. Draw the petrol, lock it back up, take the key back and sign the petrol issue sheet. Because so many Officers forgot to take the key back, it was finally secured to a chair leg. The biggest key ring on record.
Posted by Dave B at Monday, May 27, 2013 No comments:

Sherwood Lodge, prior to demolition to make way for the new Police Headquarters 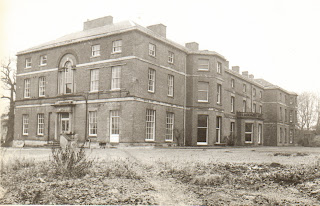 More than a hundred officers and staff and a police dog have been recognised for the part they played in responding to the violent disorder which hit Nottingham in August 2011.
The commendations ceremony took place at the Albert Hall, in Nottingham, just down the road from Canning Circus police station, which was petrol bombed during the riot and violent disorder.
Chief Constable Chris Eyre was joined by the Lord Lieutenant of Nottinghamshire, Sir John Peace, to commend the commitment, cooperation and sheer determination displayed throughout Operation Constantia.
Individual awards, as well as team commendations, were presented including:
• PC Leigh Whitehead and Police Dog Ritchie – who were involved in many of the arrests.
Nice to see a Police Dog and Handler commended! 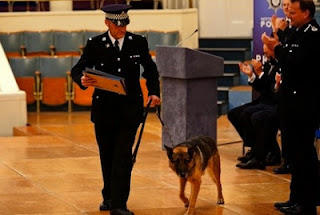