I think you should know who was the first ever police dog trainer, he is my uncle Tom Benson, he was called up to the RAF and had trained his dogs he offered them o the RAF but they didn't want them, he then went to the police who not only took the dogs but him aswell. He trained many dogs and men. I am and always will be his proud niece.

(Can anyone supply further details please?)
Posted by Dave B at Tuesday, August 23, 2011 No comments:

The following request has been made through this blog:-
Posted by Dave B at Tuesday, August 09, 2011 No comments: 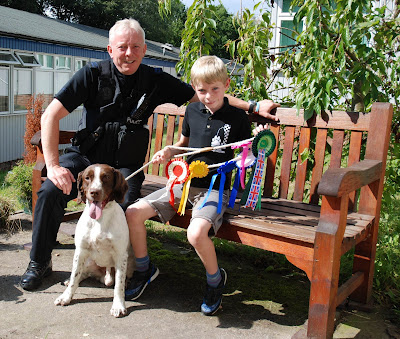 MIJ THE POLICE DOG HAS HIS DAY

Mij the sniffer dog is now the most decorated member of the Nottinghamshire Police dog squad after taking home six rosettes at a dog show last weekend (30 to 31 July 2011).

His handler PC Stuart Hazard said: “We already knew Mij was a special dog with some very special skills, but it was great to be able to show him off, as well as raise money for a cause that resonated so keenly with us within the dog section.

“He’s got more decorations than all of us put together now!”

The dog show has been staged for the past nine years in tribute to PC Ged Walker, a Nottinghamshire Police dog handler who died in the line of duty on 9 January 2003 after being fatally injured by a stolen taxi in Bulwell. He died in hospital two days later of serious head injuries.

In December 2003, 26-year-old David Parfitt was convicted of PC Walker’s manslaughter and was sentenced to thirteen years in prison.

Six-year-old Mij, a Specialist Search Dog trained in the detection and the location of narcotics, firearms, and component parts of firearms and ammunition, was proudly led out into the arena for each class by his best friend Robson, the eight-year-old son of PC Hazard.

The pair received rosettes in the following categories: Best Gun Dog, Best Condition, Agility, Junior Handler, Best Six Legs, The Dog the Judge Would Most Like to Take Home and the Waggiest Tail.

PC Hazard with Mij and PC Pickersgill with Blade also gave the four hundred attendees a demonstration of the dogs’ skills in searching out drugs and weapons, and capturing fleeing offenders

Organiser Jan Wesley, from The Old Park Farm Dog Training School based in Bilborough, said: “The Notts Police dog section always put on a good show for us, but the added novelty of the kids with the two dogs entering the competitions made it a little bit special this year.

“They loved it. They both had lovely smiles on their faces and were very excited before each class. Considering some of the classes had 30 to 40 entrants they did exceptionally well.

“I think we have recruited two more dog lovers and I fully expect them to be at next year’s show.”

In attendance at this year’s show was PC Walker’s wife Tracy, who took home her own rosette in the gun dog category with Cocker Spaniel Tilly.

More than £1,000 was raised during the show, with proceeds split between the Care of Police Survivors (COPS) Foundation, and military charity Help for Heroes.

The mother and sisters of Lance Corporal Liam Tasker, from the Royal Army Veterinary Corps, were also at the show. Twenty-six-year-old LCpl Tasker was killed in Afghanistan on 1 March 2011. His sniffer dog Theo died of a seizure shortly after.

The parents of Lance Corporal Kenneth Rowe were also in attendance. The 24-year-old dog handler, with the Royal Army Veterinary Corps, was killed in Afghanistan on 24 July 2008 alongside his ammunitions and explosives sniffer dog Sasha.

Supplementary to this release is a photo of Robson Hazard, Mij and PC Stuart Hazard at Ged Walker’s Memorial Bench, which is situated outside the Dogs Section at Nottinghamshire Police Headquarters in Arnold.

Mij’s performance in each class is detailed below: