This has been copied from a 'Comment' on my blog.

Once upon a time, the 1960's to be most accurate, Oldham Borough Police did not have one single police dog.

But very early one morning two dodgy looking young men walked up to the charge desk and stood there without saying a word.

"What do you two want?" said the Sergeant" "We have been arrested," said one of the young men.

Puzzled the Sergeant looked round the charge room, not a police officer in sight, the men were apparently on their own.

Then in walked the B.T. police dog Storm, "Oh I see now" said the quick thinking Sergeant, we shall have to get one of them."

True to his word, within two weeks an Oldham officer was sent down to Elstree's B.T. Police Dog Training School; supplied with a

The two men had been caught red handed stealing parcels off the deck at Oldham Clegg St Parcel's Depot by Storm.

P.C Walpole the beat Bobby at the Depot, said "You know where the Police Station is, off you go."

Half way up Clegg St, one of them said to the other one, "Don't be a bloody idiot, that is exactly what they want you to

And that is exactly how Oldham police got their very first police dog. Manchester already had police dogs with Inspector Morris

and Sergeant Fred Leigh in charge, they knew Storm very well, as they trained together every week at that time. 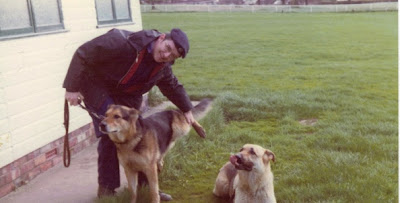 This photograph shows Pc Frazer with PD Rory and PD Flak. I wonder where Pc Hagen was at the time and who took the photo.
Posted by Dave B at Sunday, January 08, 2012 No comments: