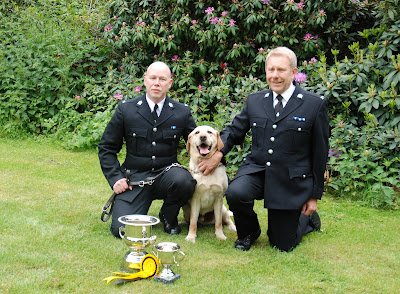 A golden Labrador who was left to die in an abandoned building has been commended for helping to keep the streets of Nottinghamshire safe.

The award is given every year to a neglected or abused Labrador who deserves special recognition for their achievements following a particularly difficult start to life.

Monty has been helping to police the county since he was rescued in 2007 when he was found starving to death at a deserted pub.

He’d been there for up to three weeks and had survived by drinking water from a toilet.

He was given a home at the East Midlands Labrador Rescue, where his carers recognised a potential in him to become a crime-fighting police dog.

He said: “He certainly had lots issues when he first came to us. He was frightened to be in confined spaces and didn’t trust anyone. But I took the time to show him lots of love, sit with him and make sure he knew he was safe.

“I took him for long walks and I saw that he had a great natural ability and had the potential to do really well – he just needed to get his confidence back again.”

But training was not plain sailing for Monty.

PC Abbott continued: “He was just not getting it at first. But he had such a bad start to life, I was determined he was going to make it.

“So I put in extra time with him and pretty soon, he was not only getting it, he was one of the best we had.”

Monty is able to easily locate a variety of weapons and illegal substances, including heroin, cocaine, amphetamines and cannabis.

Within days of his new job, he had discovered several thousands of pounds worth of cocaine, and his latest find was £3,000 worth of cannabis at a house in Worksop.

Monty lives with his handler PC Cooke and is treated like a member of the family.

PC Cooke said: “He’s spoiled at home and gets lots of love and attention. But he lives to work – that’s what he loves doing the most.

“He’s a loveable rogue and I would not swap him for any other dog in the world. He is a bit boisterous, but if you give him a task, he does it perfectly.

“I am extremely honoured and proud to receive this award, not for me but for Monty because of where he came from and where he is now.”

Sgt Donna Busuttil, from the dog section, said: “The work Steve and Rob have done with Monty cannot be underestimated.

“They make an excellent team and Monty is one of the best working dogs we have ever had in this department.

“We are extremely proud of what they have achieved and undoubtedly make a significant contribution to keeping the streets of Nottinghamshire safe.”

My thanks to the Nottinghamshire Police for this Press release