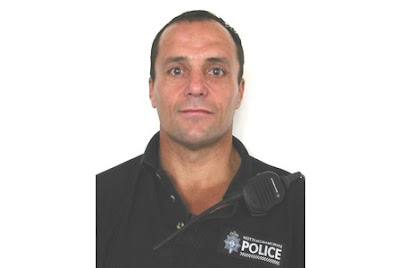 25 November 2011
Originally from Johannesburg, Mr Coetzee joined Notts Police in 1999 after working as a dog handler for the South African city's police force.

Mansfield South beat officer PC Diederik Coetzee, aged 54, is in a critical but stable condition at King’s Mill Hospital following the collision in Blidworth Lane at about 6pm.

He was cycling towards Blidworth when a vehicle struck him from behind. The motorist failed to stop following the collision.
Debris from the scene indicates the vehicle may be metallic dark grey in colour with front-end damage to the bumper, grill and at least one of the lights.
The Force’s Crash Investigation Team is trawling through CCTV footage from the surrounding area and local beat teams are making further enquiries.

Investigating officer Detective Sergeant Ged Hazelwood said: “Blidworth Lane is a poorly illuminated thorough-way but the collision happened during rush hour, when many people were headed home from work.

“PC Coetzee was wearing a high-visibility vest and had his bike lights turned on.

“Did you see what happened? Have you seen a grey car with damage to its front-end? Anyone with any information should contact us.”

Local garages and car repairers are also being urged to be vigilant for a vehicle matching the above description.

Deputy Chief Constable Chris Eyre said: “Local officers are providing support and regular updates to PC Coetzee and his family at this very difficult time. Our thoughts and best wishes are with them.”

Witnesses or anyone with information about the outstanding vehicle are being urged to contact the Crash Investigation team on 101 extension 800 2225 or call Crimestoppers anonymously on 0800 555111
Known locally as "Robocop' Pc Coetzee has an outstanding arrest record.
I, personally, wish him a speedy recovery and hope the offender is quickly brought to justice.
Posted by Dave B at Monday, November 28, 2011 1 comment:

I have received a request for any photographs from the 1960's showing the Staffordshire Police Dog Training School, in particular Sgt Howells with Police Dog Larry.
Can anyone please oblige?
See my contact details, left-hand column.
Posted by Dave B at Thursday, November 24, 2011 No comments: